This is not really a new approach but it was for me, so I decided to do some research, learn more about it and I started my invasion games unit teaching modified games, focusing more on the tactics than on the skills. I was learning along with my students as I taught it. I got support and ideas from amazing educators and gurus in this kind of approach, such as Mel Hamada, @mjhamada, and Jorge Rodriguez, @PhysedNow, who shared their resources with me.

In March, we started our “ Net Games” unit with Volleyball and I didn’t feel like I did a great job using the TGFU approach. Our school is great in many aspects, however, one of the big detail is the lack of facilities. We do have some, just not enough for the number of students I would say. As a consequence of that, my partner and I need to co-teach quite often, which is sometimes great, and sometimes challenging.  We ended up having students working on improving their skills, tracking the ball activities, and small games situation.

As part of this unit we also teach other net games, such as tennis and badminton. This year, I started teaching tennis and since I had one single tennis court for twenty plus students, I had to be quite creative with the activities I was teaching my students.

Being by myself though, made it easier to adapt my class into what I thought would be more of games than pure skills work, although, I again had students working on skills as well as games in a stationary or center set up. 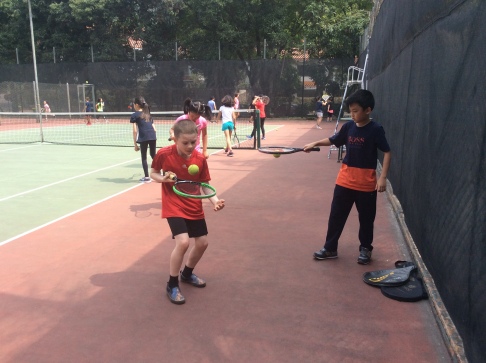 Another group playing with a partner what I called “Cooperative Tennis Game”, trying to pass back and forth as much as they could using both, forehand, and backhand skills.

Bouncing the ball up and down and all sort of tricks you can practice with a tennis racket and a ball.

In this activity, learners had to practice a variety of ways of bouncing a ball with the racket and do all sort of tricks to challenge themselves.  Since we live in the south of China and it gets really hot out there this time of the year, that was also one station where learners could take a water break.

On the other side of the net, the other half court, I had students playing a challenging game to their partners, making them work on their backhand skills, and practicing different shots.

Finally, I had a group serving underhand or overhead to the fence.

That way I had my class divided into groups of 4, maximum 5 students and they were really involved in the activity. Students played for about 3 minutes, then rotated to the next activity.

After a few sessions, I decided to introduce other games. I thought of how to maximize students’ learning in a single tennis court and which games would make sense to have them exposed to. I ended up having them playing:

In my humble opinion, one of the most important parts of this approach is to have students understanding the “what and why” of their actions and “how” they can work on achieving something they are not doing yet.

I found that stopping the games briefly and asking learners single questions, really helps them to go through that process of understanding.

One thought on “Net Games Part 1”